To the south of Hangzhou, the city of Jinhua sits in the center of Zhejiang province. As co-host of the upcoming Asian Games, it will host sepak takraw and football matches. Wuyi county in Jinhua may well be an ideal choice to refresh and revitalize.

Known as a "city of hot springs", Wuyi boasts 13 hot springs that together are believed to utilize more than 24,000 metric tons of water a day, which will be more than enough for you to dip into and bathe away the fatigue. It also boasts some of the country's most tasty organic tea. You can immerse yourself in the local culture by enjoying the delights of Wuju Opera.

Half water and half wine-that's how the city of Shaoxing is often depicted. Lu Xun (1881-1936), one of its proudest sons, would have agreed with that. Considered by many the greatest Chinese writer of the 20th century, Lu Xun, the pen name of Zhou Shuren, is one of the most charismatic figures and most recognizable icons in Shaoxing. It would be quite remiss, if you haven't read any of his works when you visit the city.

Where better to turn to than the Luzhen Scenic Resort? Based on the scenery described in Lu's classics, including the famed The True Story of Ah Q and Diary of a Madman, the place integrates folk customs, architecture and the natural beauty of Shaoxing, as well as recreating scenes from a century ago. The Former Residence of Lu is another must-visit, if you want to dig deeper into why he is one of China's most revered contemporary writers.

Before you leave Shaoxing for the next stop, do check out the Yangshan Sport Climbing Center in Keqiao district, where the Asian Games climbing competitions will be staged. A man rows a boat in the countryside of Ningbo, East China's Zhejiang province. [Photo provided to chinadaily.com.cn]

A major coastal city and a key link in both the ancient and contemporary maritime Silk Road, Ningbo will host sailing and beach volleyball during the Asian Games.

Unsurprisingly, the city has an abundance of seafood on offer, a common feature of Ningbo cuisine. Characterized by steaming, braising and stewing, Ningbo cuisine is often described as "fresh and salty". While in the city, yellow croakers with pickled cabbage, salted crab and braised octopus are among the popular local dishes you must try.

One of the must-visit places is Moon Lake, affectionately called the mother lake of Ningbo, which has a history of over 1,400 years and features 10 charming islets. On its west bank stands Tianyige, or Tianyi Pavilion, built some 460 years ago and believed to China's oldest surviving library. Time permitting, you might also drop by the Mahjong Exhibition Gallery, the only one of its kind in China, and get a taste of one of the most favorite Chinese pastimes-a word of caution: don't grow too addicted to it!

This photo shows the countryside in Wenzhou of East China's Zhejiang province. [Photo by Liang Daming/cpanet.org.cn]

With four distinct seasons and abundant rainfall, Wenzhou city, which sits in the south of Zhejiang, enjoys a pleasant climate, making it an ideal location for dragon boat racing during the Asian Games. Indeed, these races and activities are held every year in the city and particularly loved by local people. With hundreds of thousands of people who used to reside in Wenzhou now living all over the world, this tradition carries special significance.

The newly constructed Wenzhou Dragon Boat Sports Center, where six gold medals will be up for grabs, has now become a tourist attraction itself. Viewed from above, the center looks like a dragon resting on a river, which couldn't be more fitting.

During the Labor Day holiday, the city's Wuma Historic and Cultural Street will be a good place for you to take a stroll, soak in a bit of the local history and culture before you buy some souvenirs for your family and friends. 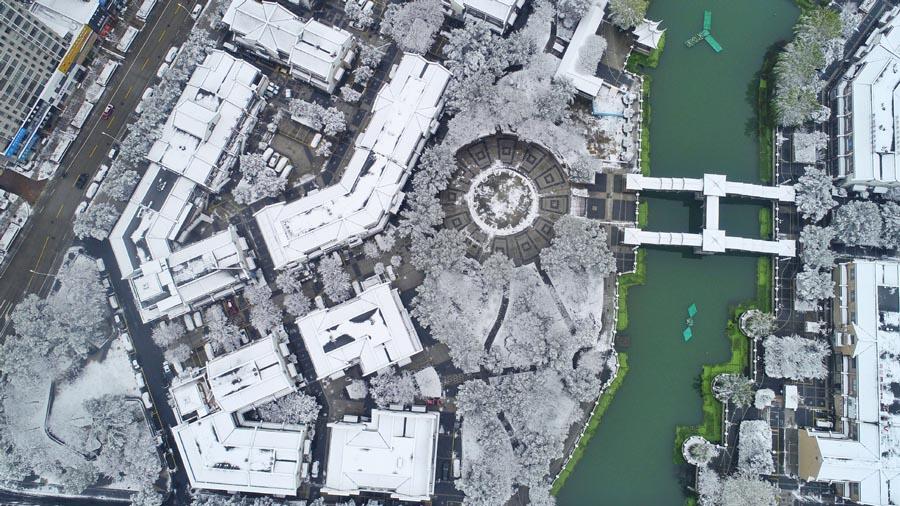 Some 60 kilometers away from Hangzhou lies the Mogan Mountain in Deqing county, Huzhou city. During the Asian Games 2022, events such as the 3-on-3 basketball contests and volleyball will be held in the county. Before you dive into the heat of games, why not retreat to the mountain cool and enjoy some tranquility?